Introduction: In the circle of Continuous Improvement, we have a sector known as statistics. Experts talk about it, write about it, put emphasis on it and promote it. But how exactly is statistics linked to continuous improvement in your organization? Is it necessary? Can we avoid it? Let’s find the answer through a live classroom experience.

Let me set the canvas first. And then, we will together paint it.

A group of 12 Senior Managers and DGMs (Deputy General Managers) of a Pharma organization enter a classroom setup.

The objective of the day is to learn to apply the concept of correlation and regression so that the leaders can achieve their business goals. No, this is not a blog on how to calculate R-square adjusted and p-values. That will come later.

As the future leaders of the organization enter the classroom, they see a setup of two catapults. 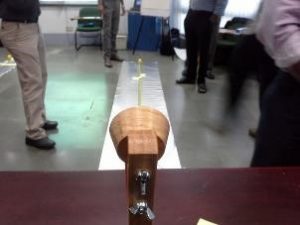 Catapult and the setup

No doubt they are senior leaders, but the idea of playing with the catapult is bit too tempting to resist. As expected, some of the managers start to play with the catapult. Some of them started to shoot balls as well. We told them: Wait, hit this plate.

And we put a plate at a distance of 150 inches from the table to which the catapult was clamped.

They did hit the plate, but in 18 trials. The other team (Team B) hit the plate in 15 trials. Yes, the 12 leaders were now divided into two groups of six each.

When the groups hit the plate, they were definitely smiling and patting each other on the back. However, the smiles lasted for only a few moments when we quietly shifted the plate 7 inches away from the catapult, for both the group.

We requested the groups to hit the plate again. This time Team A took 19 trials. However, Team B took only 10 trials. No wonder Team A was inquisitive and wanted to know what is that Team B was doing. We requested Team B to share their approach. Team B revealed that they would first hit the ball at any given angle. For both the plate position, the ball fell short of the plate. Then they gradually increased the angle till the time they actually hit the plate.

And thus started the discussion on Correlation and Regression.

We asked the leaders whether it is possible that they hit the plate in the first trial itself. Being senior leaders, they kept quiet. Some uttered “May be”. Their experience had taught them that given the right process and proper focus, they could achieve any target. 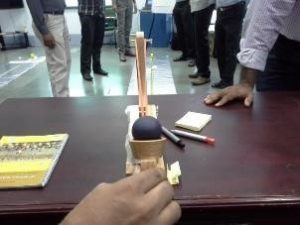 Senior Leaders toying with the Catapult

We affirmed that it is possible and that by the end of the day they will have the answer. At the end of a series of well planned set of steps and 2 hours later, the teams had the regression equations with them. The catapult was set, the plate was set. Team A released the ball. It hit the target. There were claps and smiles and cheers. We changed the plate position. Team A hit the plate in the first trial again. Some more cheers and claps and smiles.

Here we start to peel off layer by layer and try to find why one team was successful and the other was not. The catapults were same (Yes, they were brand new), the average experience of both the groups differed by 6 months. Just to let know some of our readers, the difference of median experience was approximately 8 months. And yet there was failure and success. What was different? The process? Let’s look into that. But the revelation of why one team hit the target and the other did not was intriguing, thought provoking and long lasting, for myself and for the leaders of this Pharmaceutical organization.

That revelation is the inspiration for this blog post.

Let us retrace our steps and see what went wrong with Team B and what went right with Team A.

The teams first went through a facilitated brainstorming session on what are the possible causes that effect the distance at which the ball hits the floor. Then they categorized the causes based on the concept of fish bone diagram. Then they further drilled down the causes into more specific causes through Why-Why analysis. The creation of fish bone diagram was also facilitated by us. So far so good. The number of causes in Team A were only 1 more than the number of causes in Team B. And the extra cause in Team A was with regards to external wind velocity. Since both the catapult were in the same temperature controlled room, we can safely negate this cause. 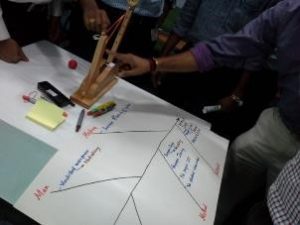 Based on the fish bone diagram, the teams were requested to list down possible solution which could enable them to hit the plate in the very first trial. Both the teams brought out the importance of having a process by which the catapult is operated. And so, we requested the teams to create a SOP (Standard Operating Procedure).

And this is where the teams started to diverge. SOP of Team A was detailed and included points like

However, with inputs from the facilitators both the teams created robust SOPs. But the best (or worst?) part was yet to occur.

We reasoned, along with the teams, that if we shot the ball at fixed angles, it will be easier to decide what distance a ball will travel at an another given angle. This led to the data collection plan, in a pre-defined format. The teams will shoot balls at four different angles. And for each angle they will shoot the ball five times.

They came back to where the catapult were placed. We kept a plate at 165 inches from the catapult. Now, that they knew the distance, they calculated the angle using Minitab.

And now it was Team B. They failed to relook at the SOP. The table was bit out of place. And when they first released the ball, it fell short of the target. And this time there were no cheers, no smiles and no claps. Only disappointed faces and worried words.

They tried again but some more disappointed faces and words.

And when we asked team A how did they hit the target twice in a row? The answer was that it was because of regression and Minitab.

I said, “Right. What happened to team B then? They also used Minitab and regression.”

There was a moment of silence in the room. 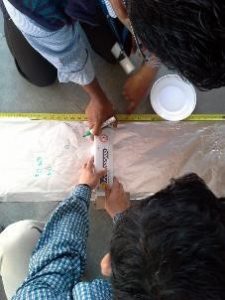 Leaders ensuring that the measurement system is accurate

There was something that Team A did right. And one such action is visible in the following picture.

As is visible in the picture above, Team A focused on the basics. They ensured that the data collected is accurate and precise.

It was not Minitab (or so to say statistics) alone which decided Team A’s success. From the brainstorming session where the team members participated heartily to the fish bone diagram and the detailed specific causes to the accurate and precise way of data collection, team A focussed on basics all the way long. And the outcomes were cheers and claps and smiles.

Why Team A focused on basics and Team B did not, is again a topic of another blog post.

Minitab only helped Team A in achieving its goal in less time. Similarly, there are many other “technology” tools which will help you achieve your goals in less time, provided you have the basics right.

Now, why did Team A have the basics right? We will take it up later J

Can we avoid statistics? Probably at the start of the Continuous Improvement journey. At the start of the journey you have so many low hanging fruits to eat that you do not need the rigour of statistics to help you get the fruit on the top branch. Having said that, may be your organization has already tasted the low hanging fruits. In that case, take the leap, and your focus on basics and statistics, as an enabler, will help you pluck the fruit on the farthest branch.